The effect of rolling resistance mechanisms at particle contacts and associated energy dissipation may be of major importance for many granular applications, both in the dense quasistatic regime or in dynamic regimes. In real granular systems, these mechanisms may have different micro-mechanical origins, such as adhesion on the contact area, or steric effect due to surface roughness or non-sphericity about the contact point. The rolling resistance contact model provided in PFC is a simple model, based on the linear model, that incorporates a torque acting on the contacting pieces and resisting rolling motion. It is based on the review paper by Ai et al. (2011) and on the work presented by Wensrich and Katterfeld (2012). The user is encouraged to consult these papers and references therein for a good introduction to the importance of rolling resistance mechanisms in granular applications and their implementation in DEM numerical models.

The behavior of the rolling resistance linear contact model is similar to that of the linear model, except that the internal moment is incremented linearly with accumulated relative rotation of the contacting pieces at the contact point up to a limiting value equal to the current normal force times a rolling resistance coefficient times an effective contact radius. The constant that relates the increment of internal moment to the increment of relative rotation at the contact point, denoted as rolling stiffness, is related to the shear stiffness and to the effective radius of the contact following Iwashita and Oda (1998). As discussed by Wensrich and Katterfeld (2012), this choice sets the nominal rotational natural frequency due to the rolling stiffness equal to the nominal rotational natural frequency due to the shear stiffness, and leads to a well-behaved and well-damped rolling resistance mechanism without the need for an additional damping parameter. The rolling resistance contact model is therefore similar to the one described by Wensrich and Katterfeld (2012), except that it is based on a linear model instead of a Hertz model. Note that this model only resists relative bending at the contact point. More complex models that include resistance to bending and twisting have been proposed (see for instance Jiang et al., 2015).

The following plots show the finals state for µ = 0.6 and µr = 0.8 (top and bottom left), and µ = 0.2 and µr = 0.1 (top and bottom right). The balls identified on the free surface are colored green and were found from a fitted cone surface (shown in the bottom plots) function using algorithms available in the SciPy Python module. 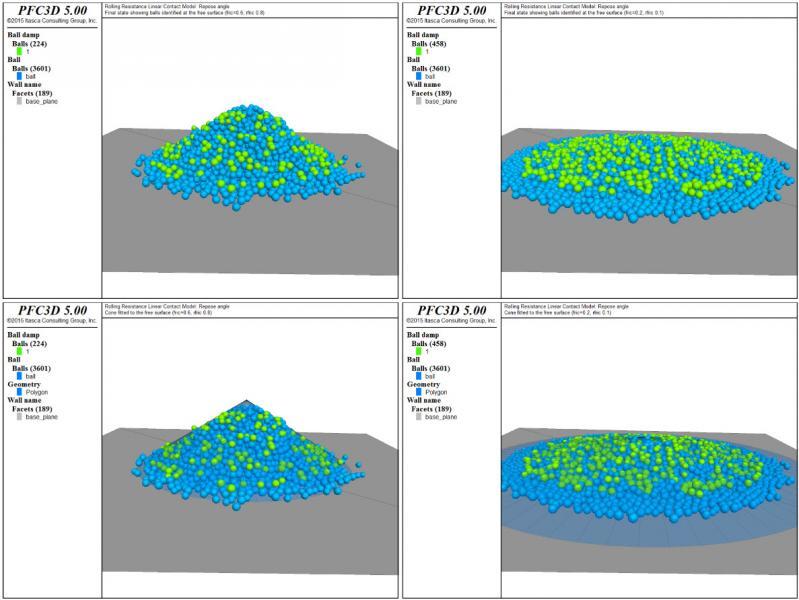 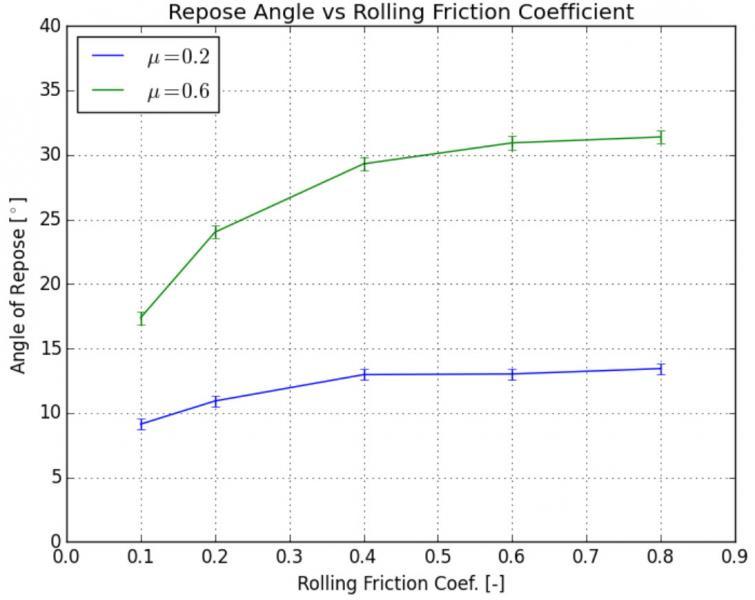