There have been some major changes to the commands and FISH syntax since Version 5 of Itasca's 3DEC and FLAC3D software. Rewriting your existing data files or favorite FISH functions could require a significant amount of work. But did you know that 3DEC and FLAC3D include a Command Conversion tool, affectionately called the "converto tool"?

You can find the command conversion tool under Main Menu > EDIT > FLAC3D(or 3DEC) Command Conversion... Simply open your FISH function or data file into the current Project and click this menu item.

The Command Conversion dialog provides the option to convert with FISH Safe conversion mode on or off; on is the recommended default.

Before doing the conversion, a back-up copy of your original file will be made in a folder called “pre-conversion” in the same directory as the data file. The data file will then be converted, reloaded into the text editor, and saved.

You can see the steps as follows using a 3DEC 5.2 FISH function in the following slides. 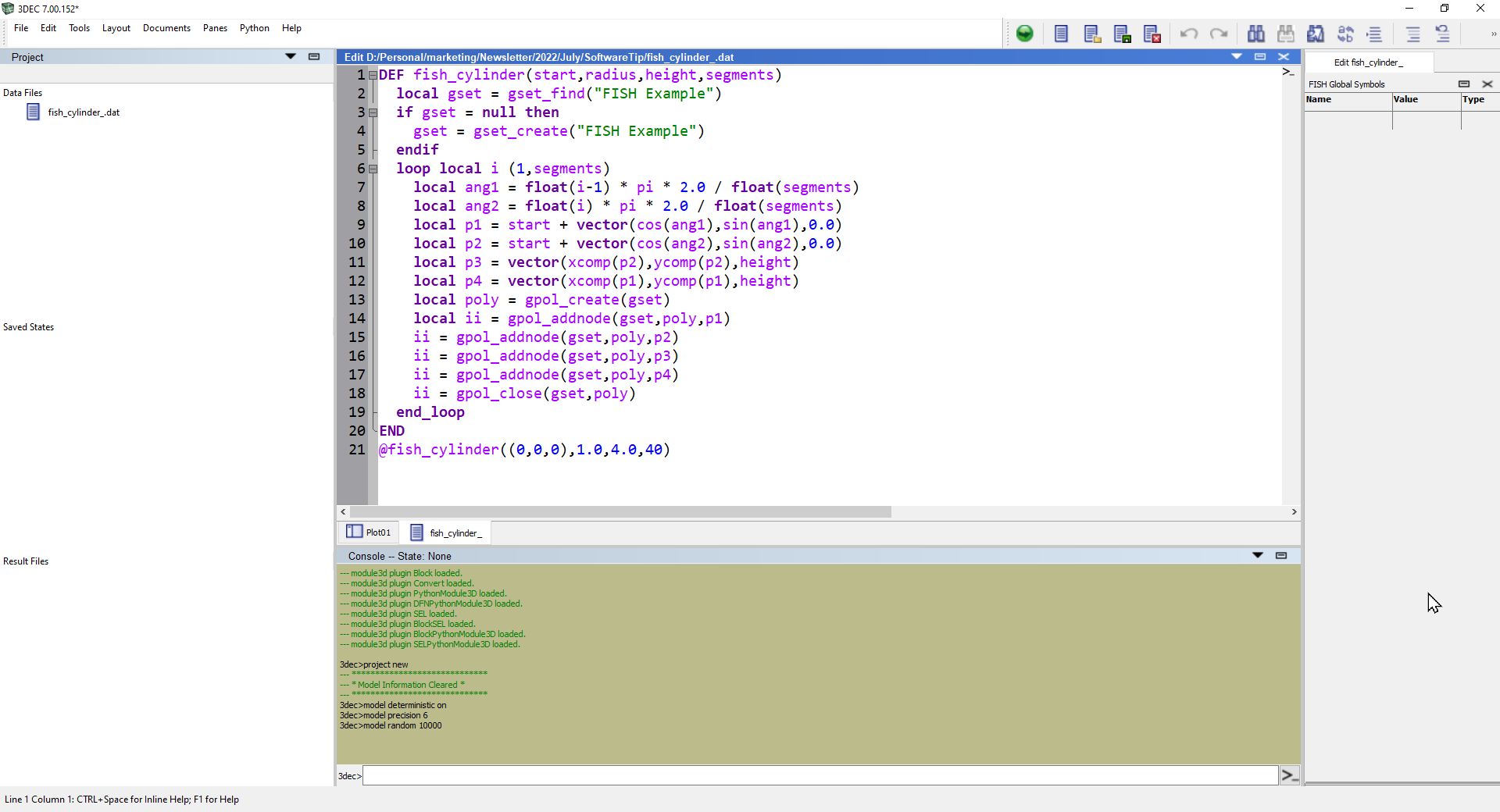 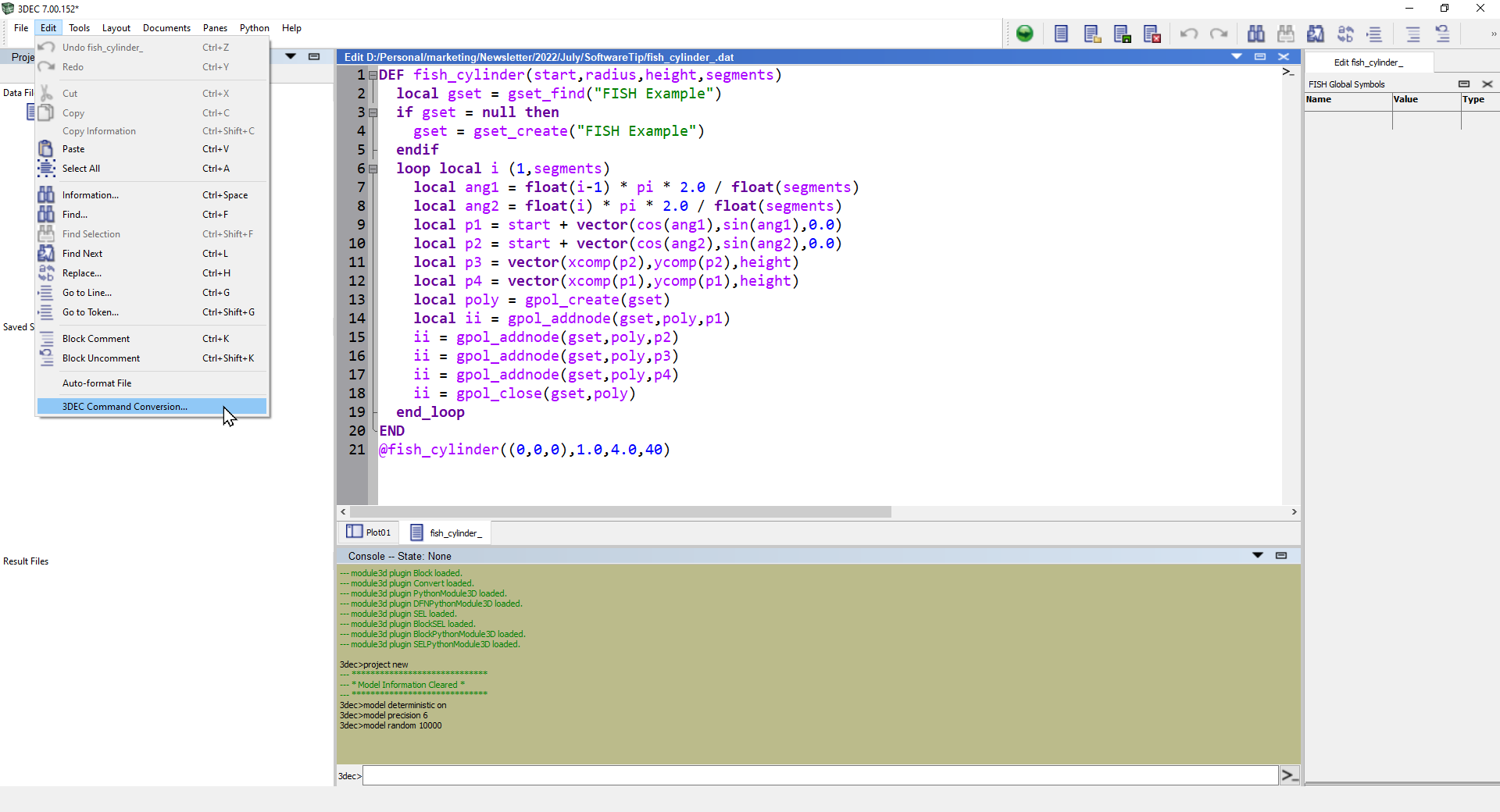 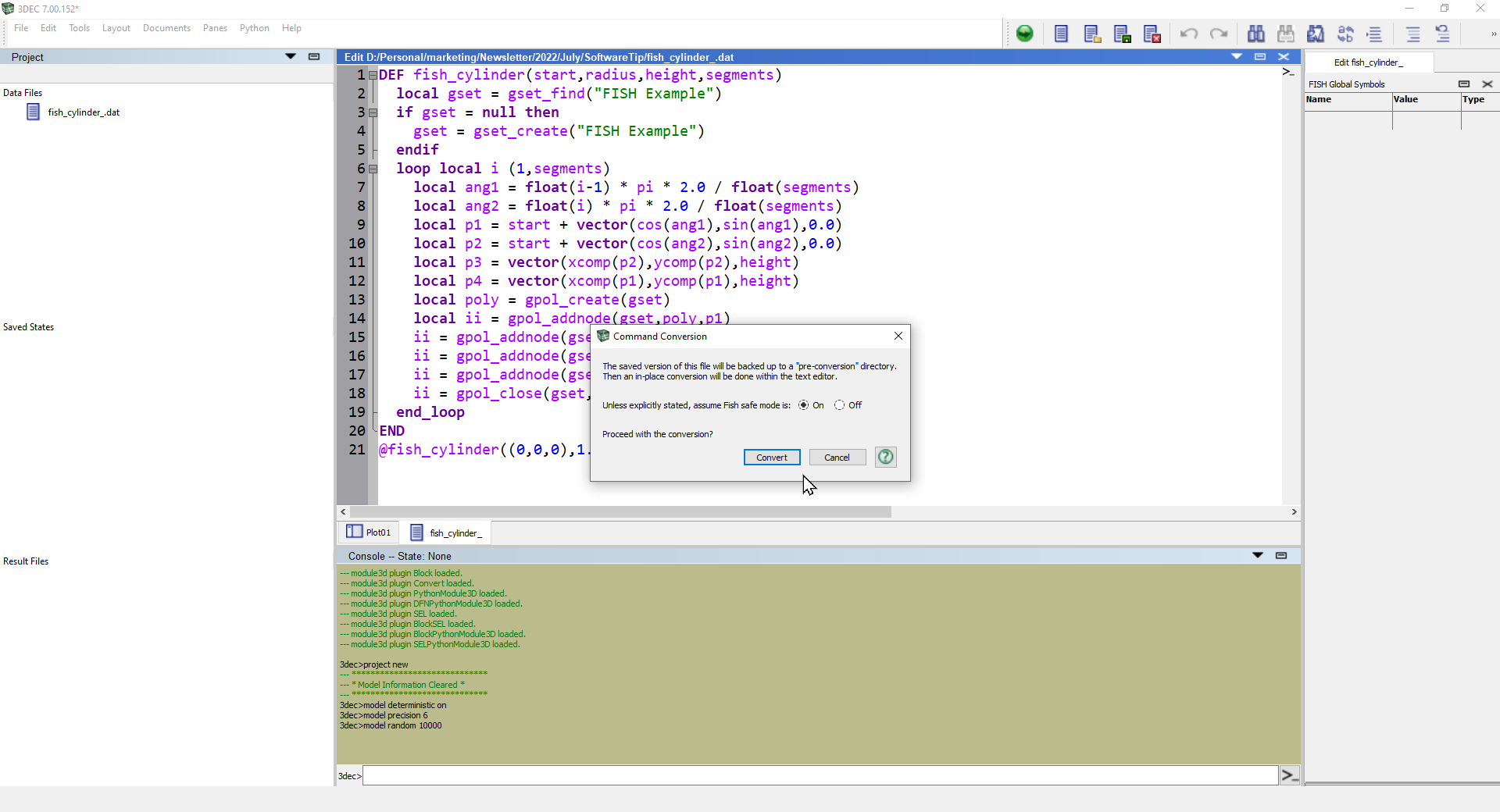 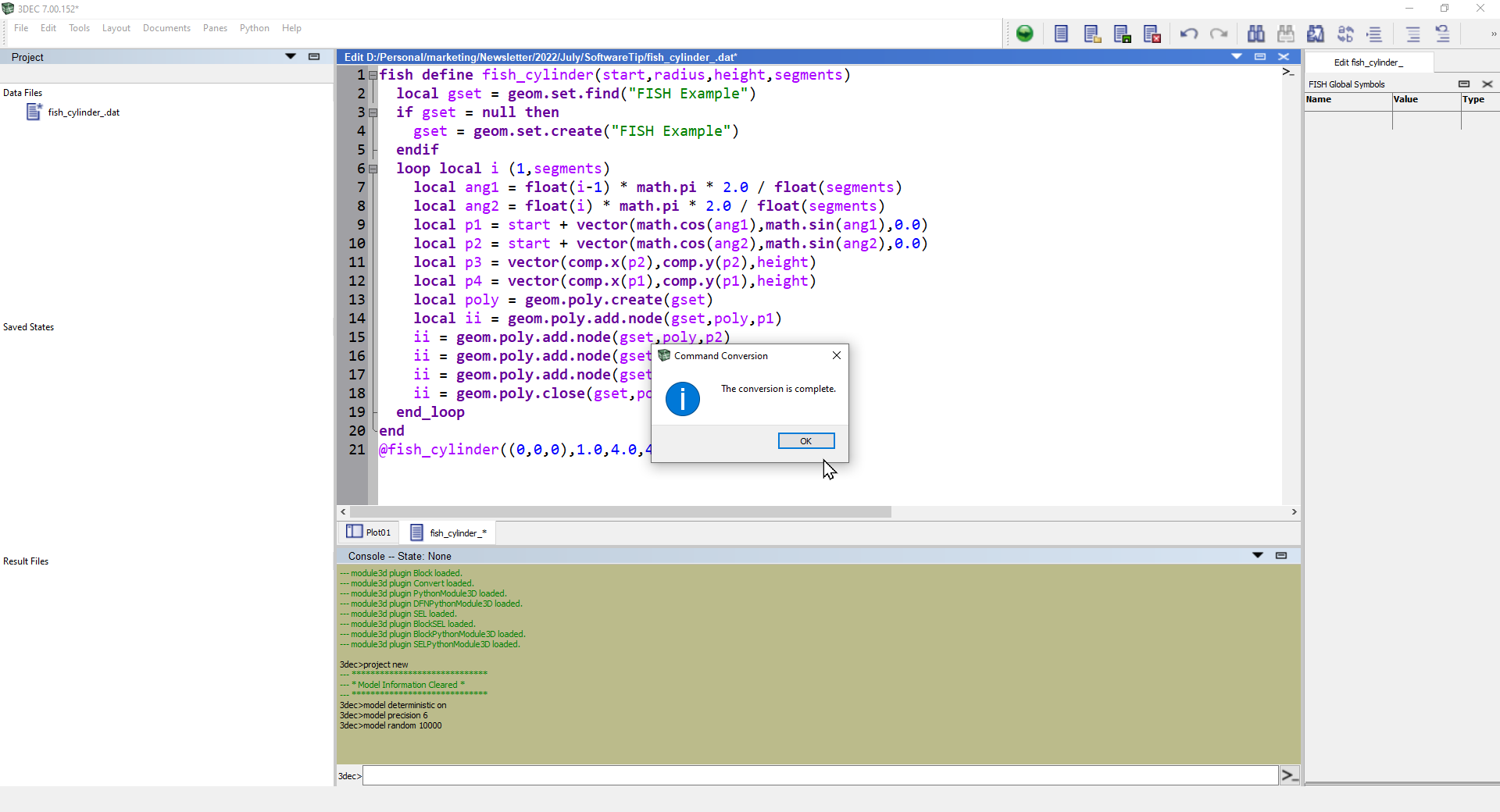 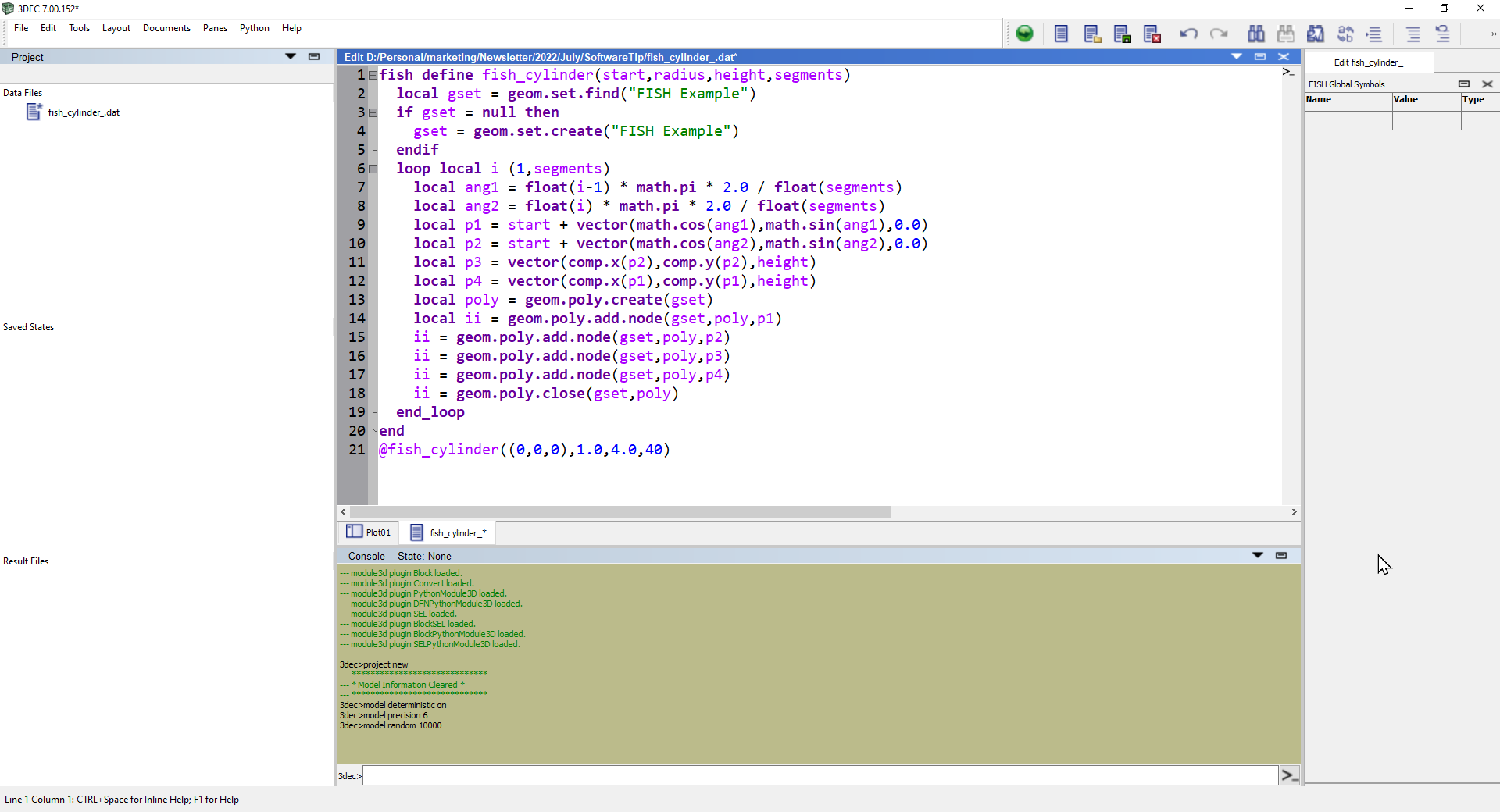 Running this FISH function in 3DEC 7 and plotting the geometry set "FISH EXAMPLE" shows the following. 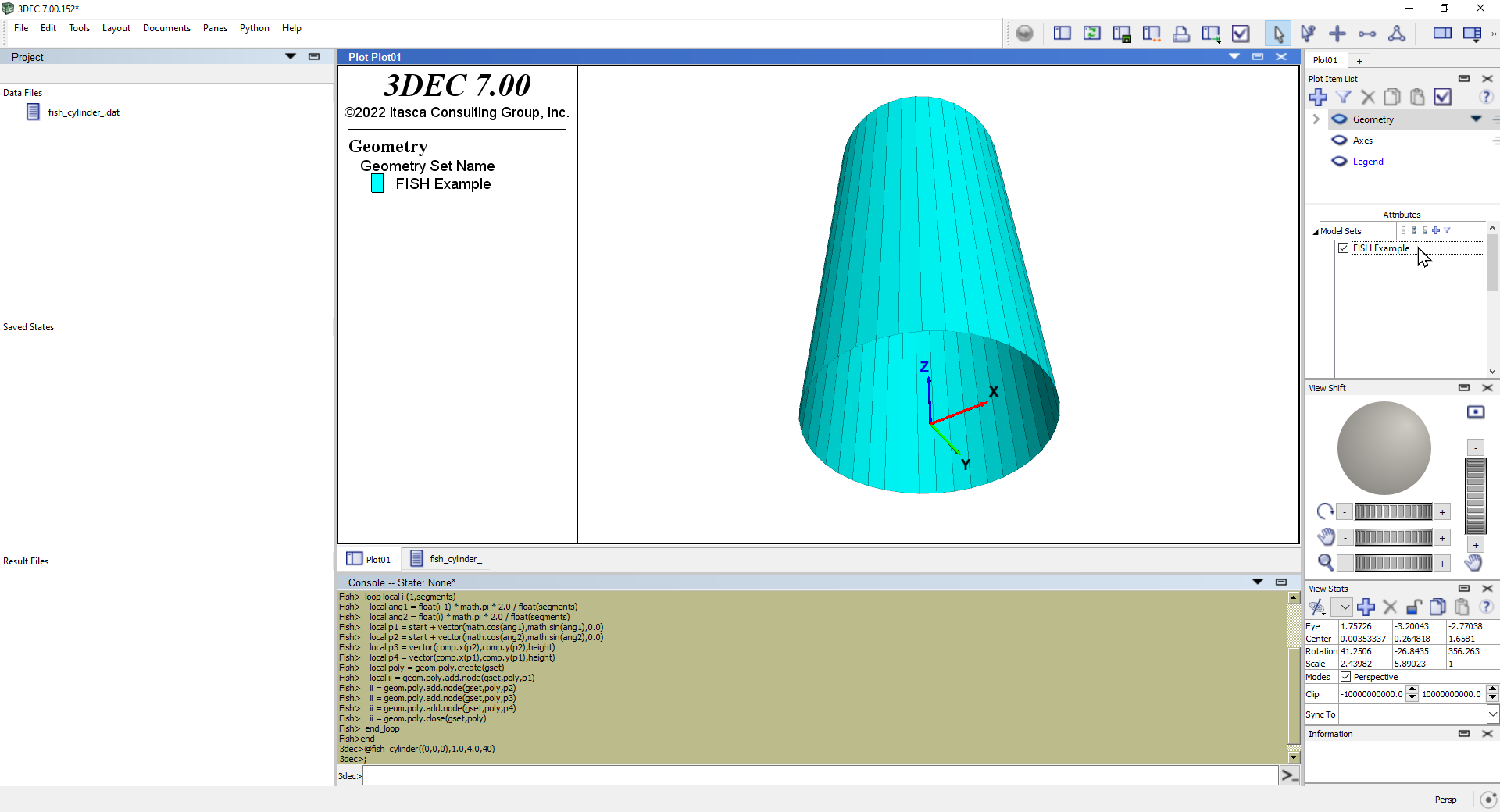 Of course, as part of Itasca's ongoing efforts to improve software usability, new commands and functionality are continuously being added. Today, you have the flexibility to create customized geometry via FISH (as above) or, for simple geometries, just issuing a command. For example, the command geom cylinder axis (0,0,1) base (0,0,0) height 4.0 radius 1.0 cap false false set 'easy-cylinder' will generate the same cylinder as the previous 3DEC FISH function. You can see both geometry sets below. 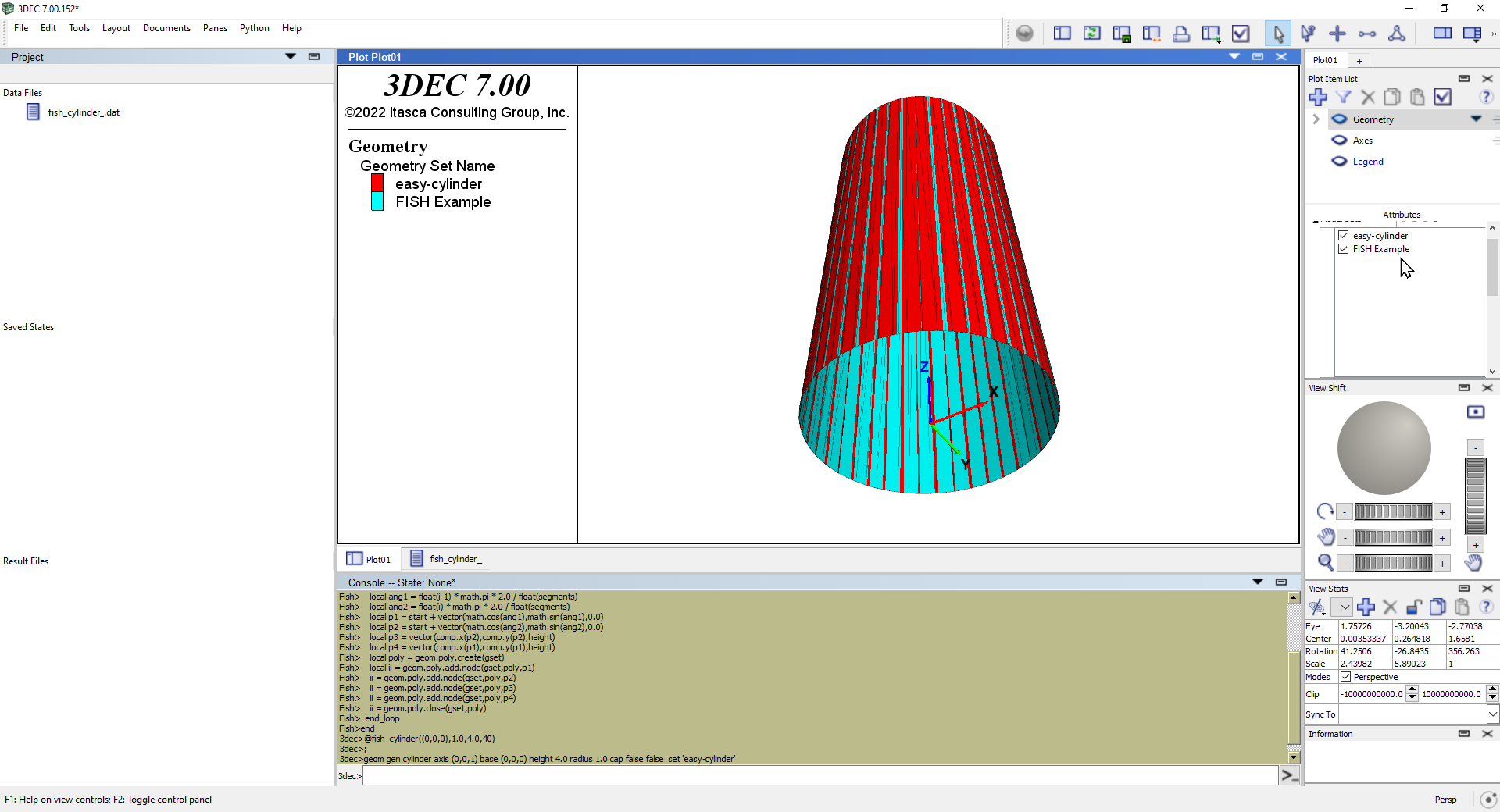 How good is the conversion?

In our experience, the converto tool is highly effective. However, there will be cases where it cannot translate an earlier version command. These may include deprecated commands (e.g., material numbers are no longer supported) or ambiguous material property keywords, especially if the keywords have been truncated. For example, bu could mean bulk[modulus] or bulk-reference, or bulk-maximum depending on the constitutive model being used.

In such cases, the problematic portion of the command in question will be surrounded by “%%” symbols in the data file and highlighted in orange. When available, explanatory information will appear, commented as well as highlighted in orange and denoted by "%%". These commands will require user correction to complete conversion. TIP: Place the cursor in the line with the problem command and press F1 to directly access the program documentation for that command.

For example, the command prop bu 1e6 in FLAC3D will display as follows after being converted.

As you can see, all the possible keywords are included. Most of the work has been done for you; now just remove the unneeded keywords, %% symbols, and commented line. Data files and FISH functions back to Version 3 should be convertible to Version 7 ongoing, notwithstanding some exceptions noted above.

Another example of using the Command Conversion tool for a model is a FLAC3D 5.0 data file that generates a quasi-random surface topography and initializes model stresses. In the last slide you can see the final model with the commands disambiguated, warning messages removed, and model new and model strain-large* commands added. 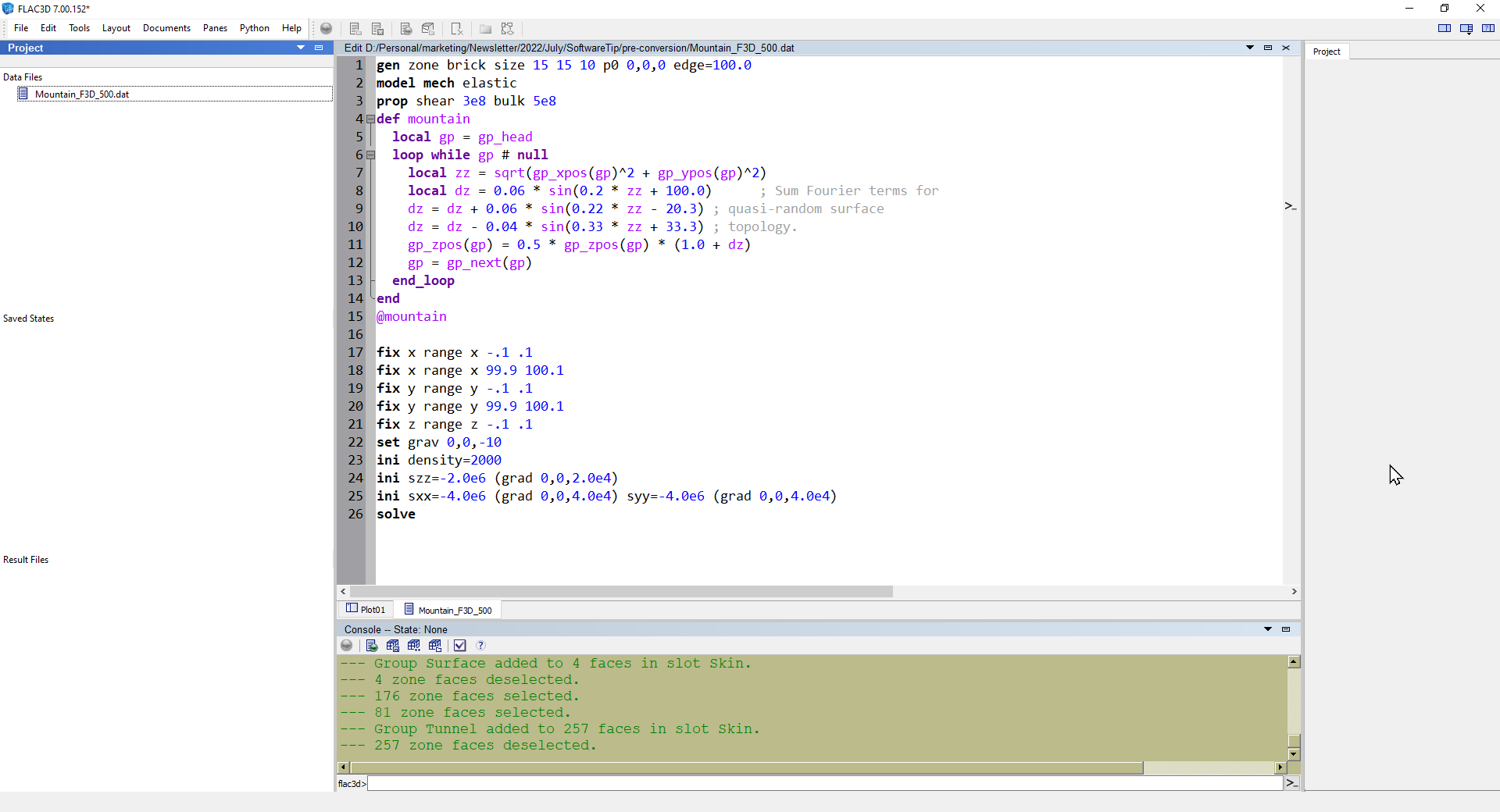 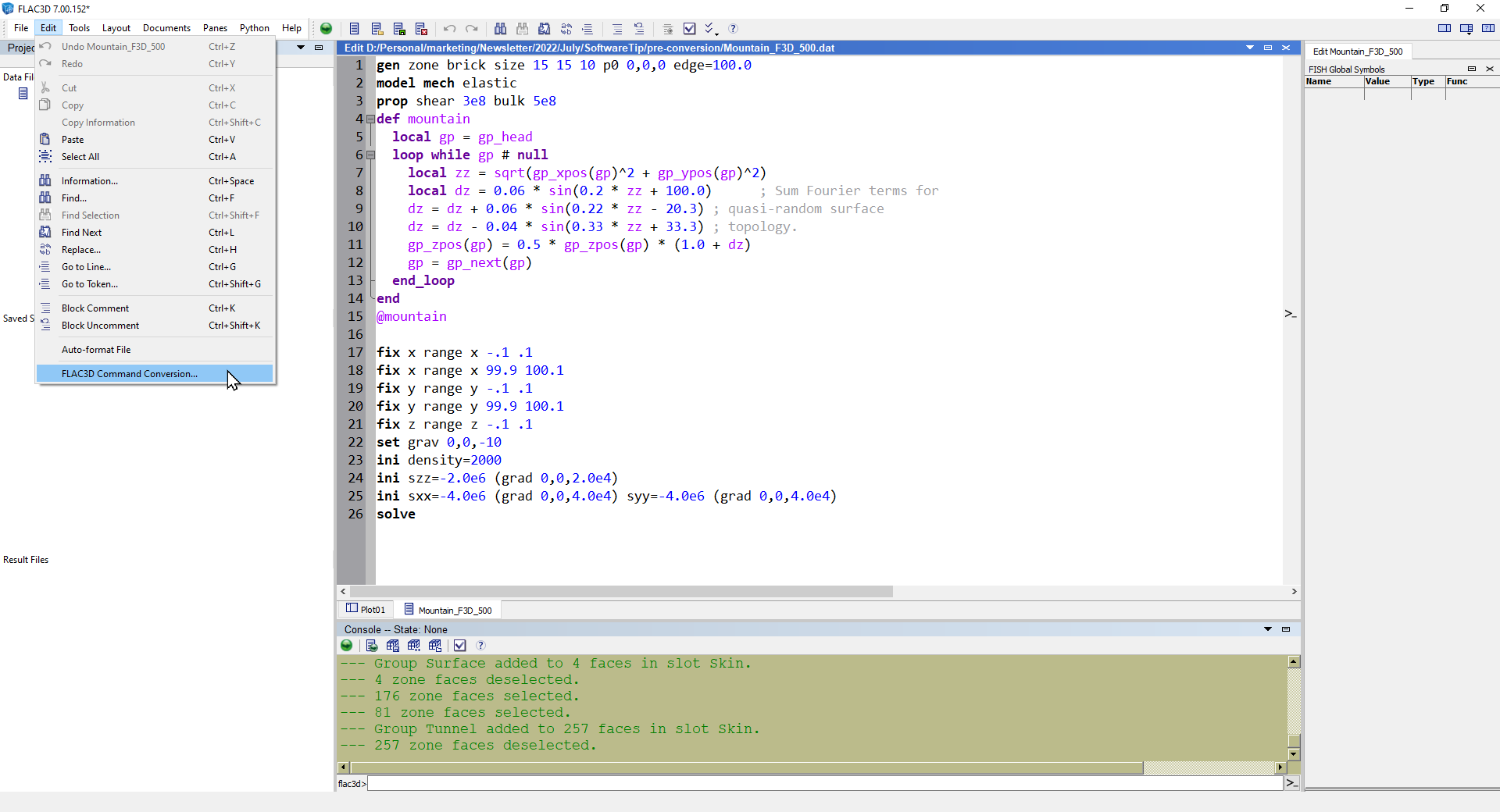 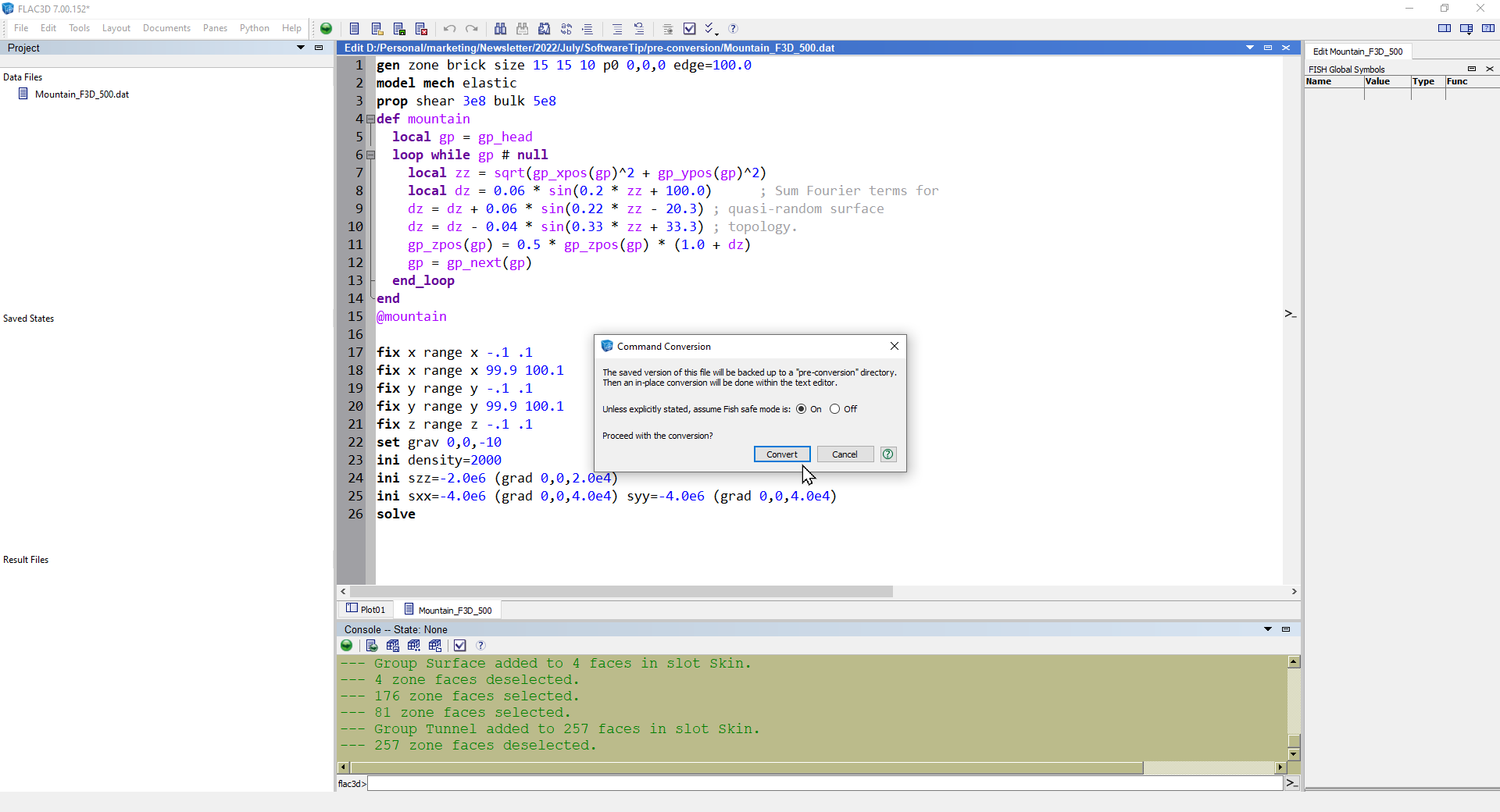 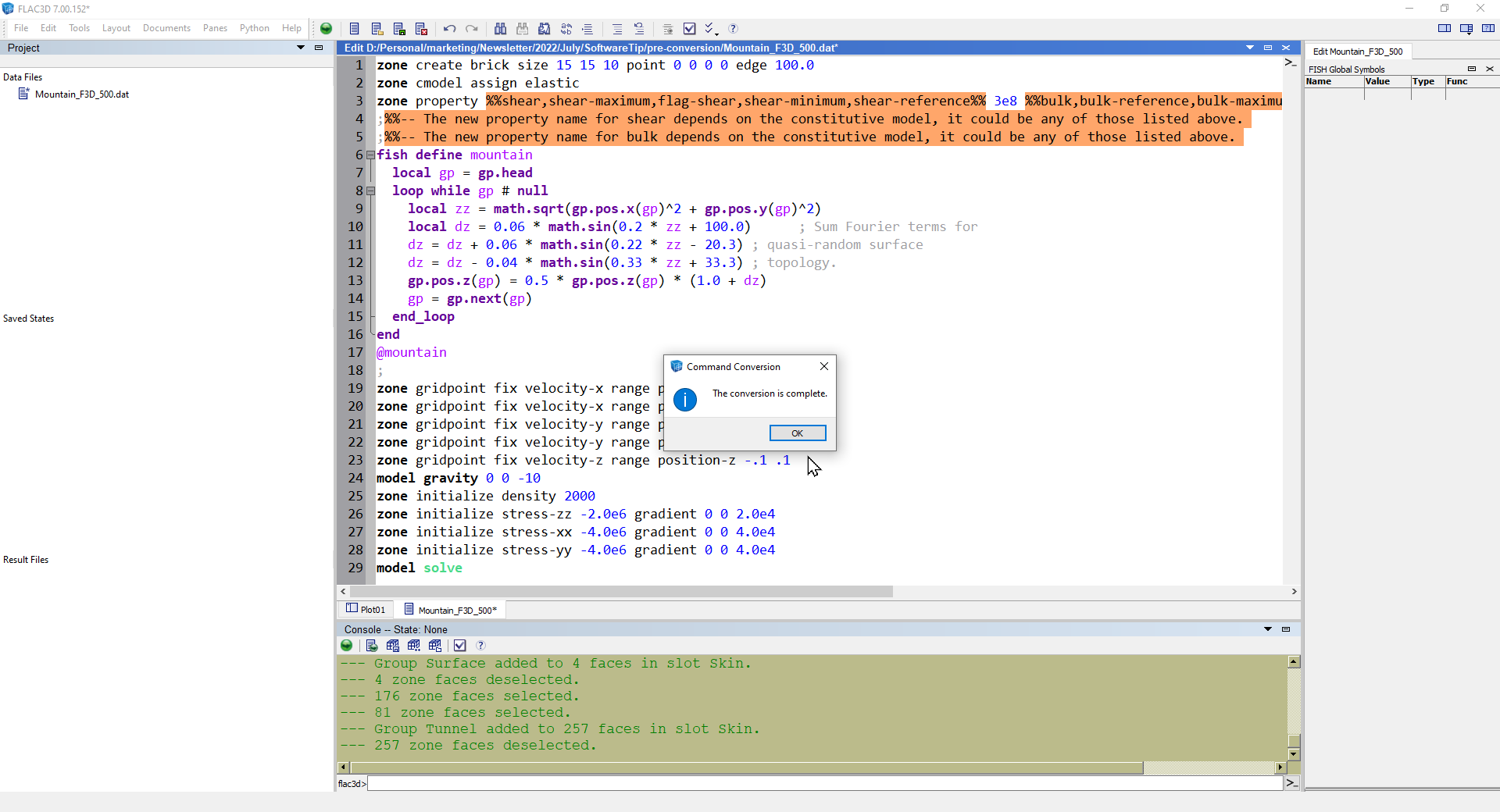 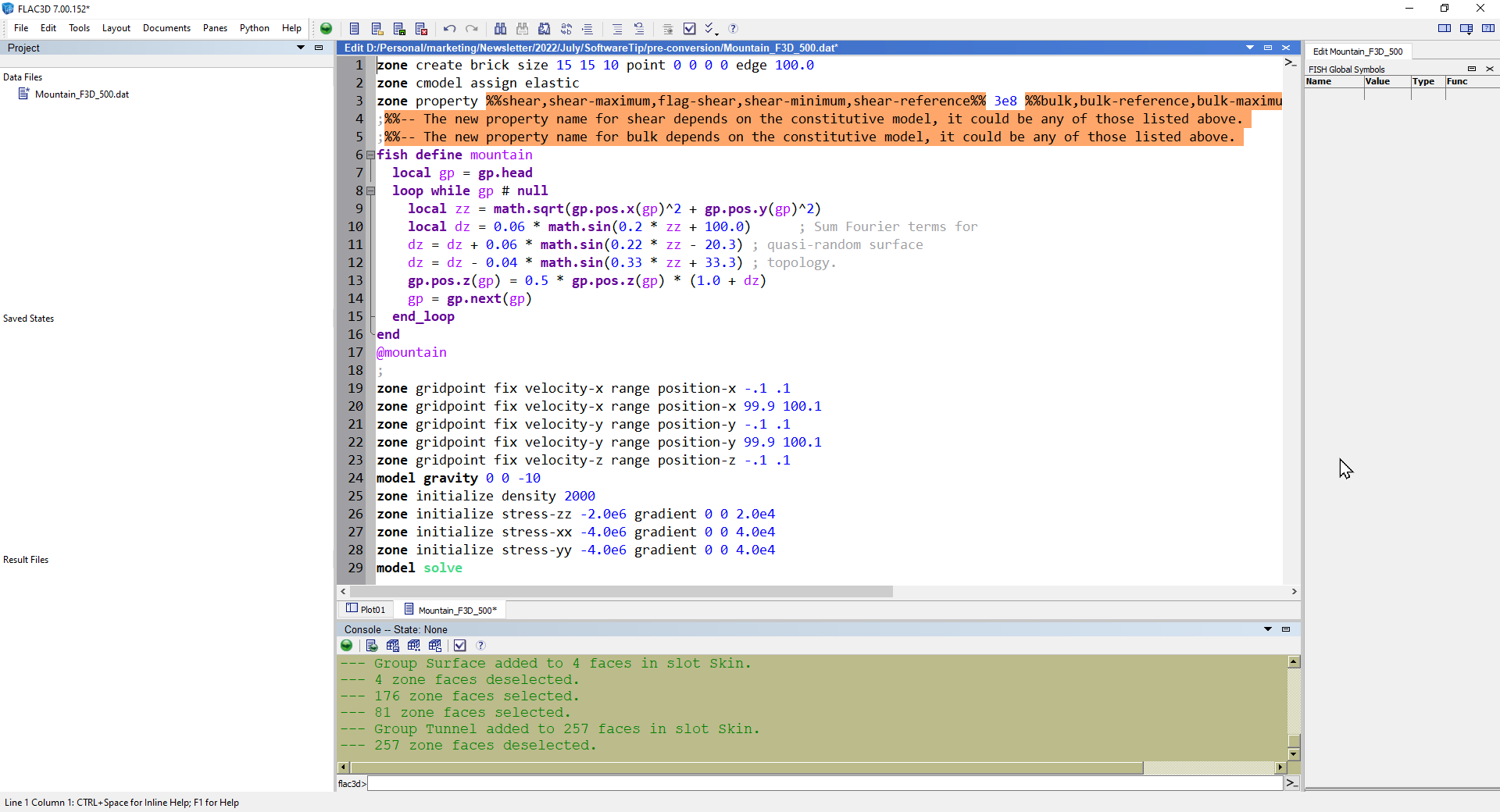 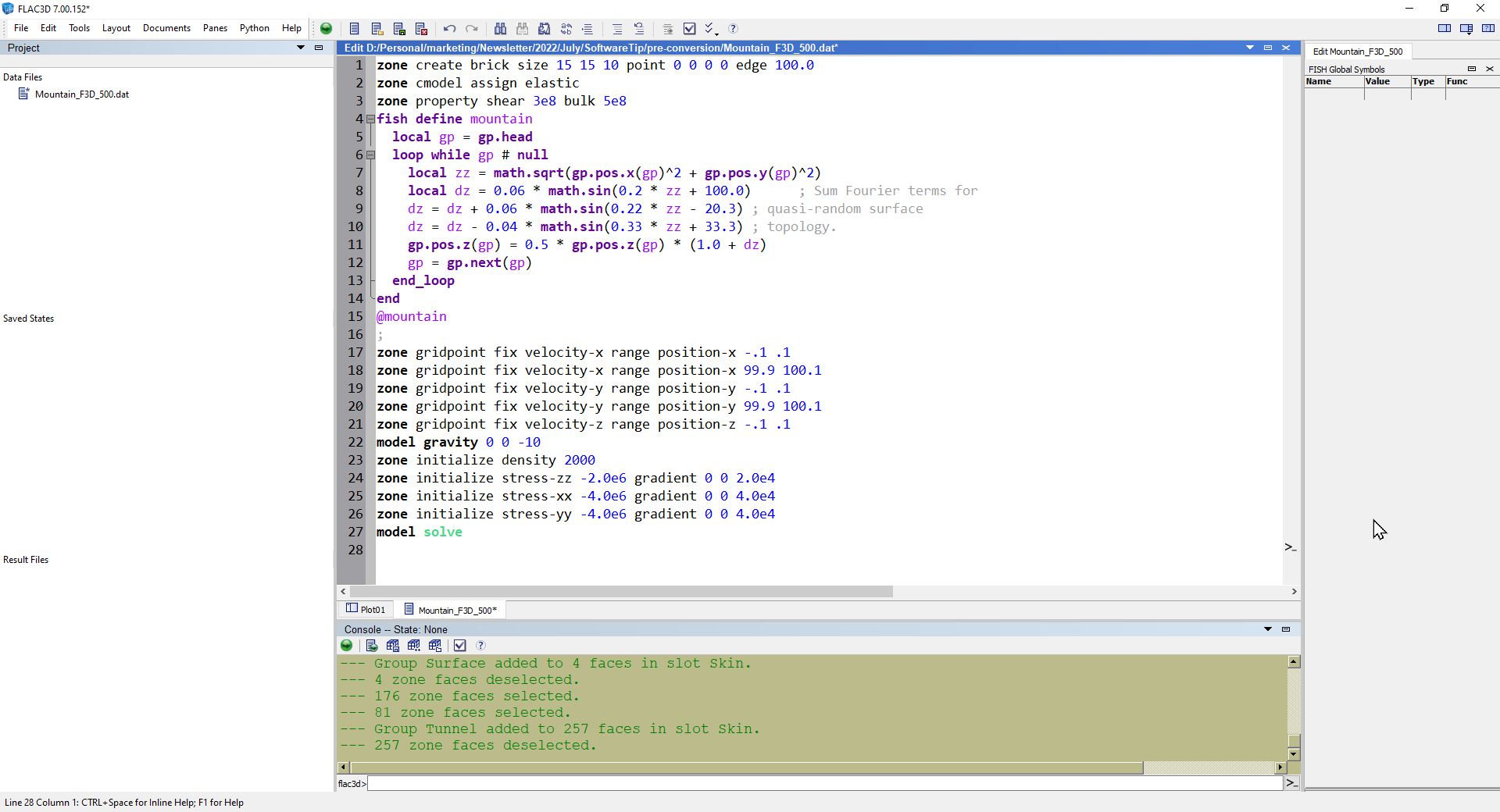 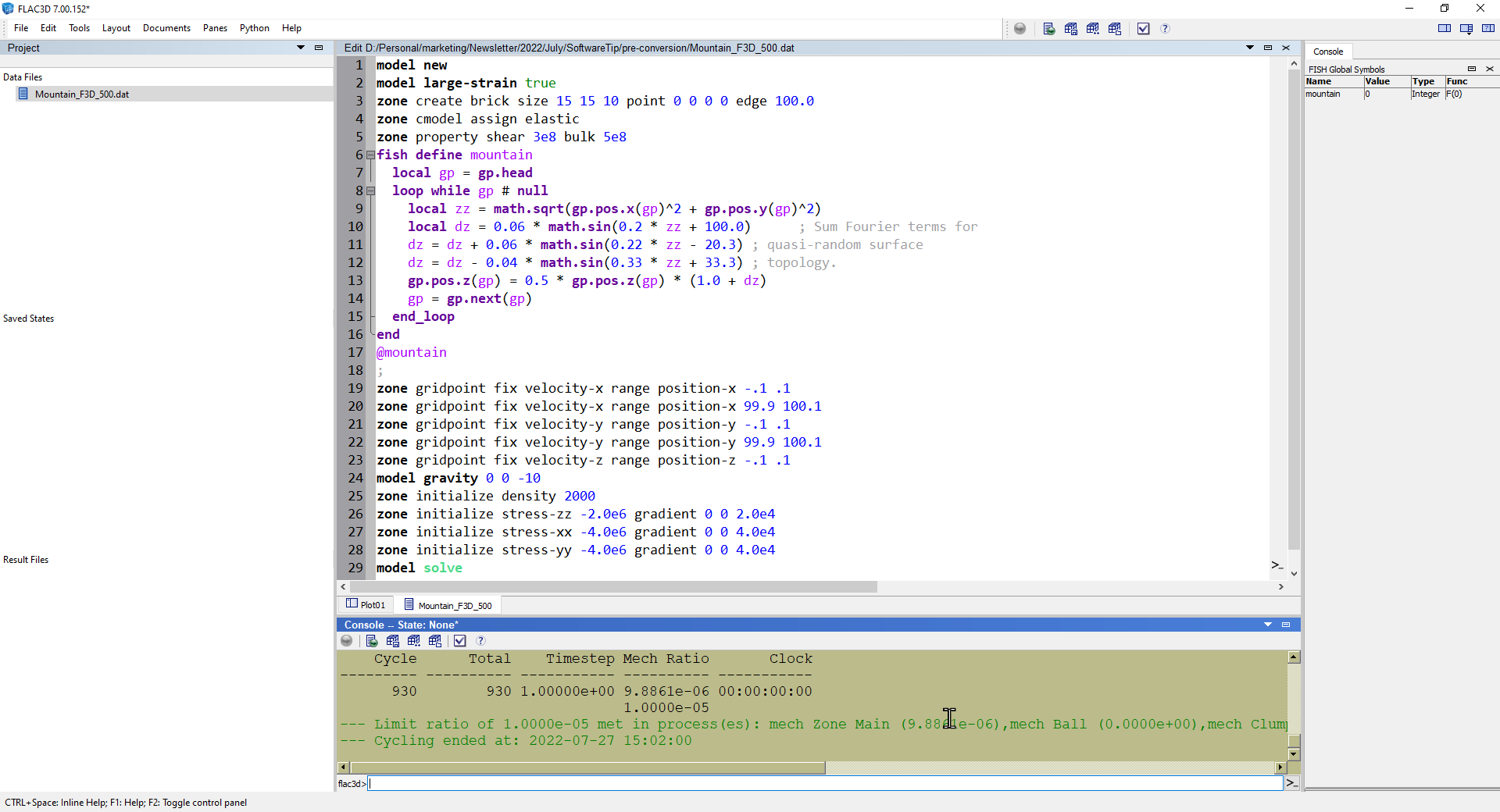 In addition to the Command Conversion tool, you will find Command and FISH Mapping references in the software documentation. These are tables that list commands from earlier software versions and provide counterparts for the current version (mapping), including links for more details. This is a great source to see what the equivalent command is now, it's available keywords, structure, data format, and other information.

*NOTE: Earlier versions of the Itasca software set large-strain analysis mode as the default. As of Version 7, you must specify whether the model should run in large- or small-strain mode prior to cycling. You can do this by adding the command model large-strain [true or false] before cycling the model.