On May 2021, a slope failure called “Leo Failure” occurred at Bingham Canyon Mine, one of the world’s deepest open pit mine, for a total runout mass estimated at 21 MT. Extensive and comprehensive monitoring of the mine activities allowed to anticipate and record the event and prevent any labor or equipment damage.

A trial-and-error procedure was used to reproduce the complex, two-stages failure observed on site and best match site measurements of the post-failure runout surface, relative positions of the failure zones, position of benches, and trajectories and final positions of markers.

A geology block model was then output from the final state of the model and compared with previous predictions and an assay block model created on site from actual drilling and sampling operations.

Both the coarse and fine model were satisfactorily calibrated. No significant differences were noticeable between the two models, thus the computationally efficient coarse model can be used for production.

The variance in Cu grade to the Ore Control block model is reduced in the PFC model compared to previous predictions. This means that the output of the PFC model is closer to the actual grade of the mined material. This demonstrates the ability of such modeling in better predicting grades in the runout mass compared to existing methods, which is of interest for designing and planning site operations. 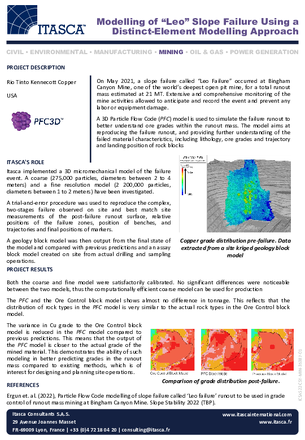